Hindutva media in the diaspora: The double speak of Indian Newslink

Hindutva in the diaspora needs to be tactically savvy in order to disseminate its hate politics and seed disinformation while simultaneously performing inclusive multiculturalism to be accepted by the Pākeha (and tangata whenua). It must make sure that it speaks the language of democracy and rights in the diaspora while erasing alternative voices and perpetuating untruths

The local Indian media in Aotearoa is complicit such that it not only amplifies Hindutva but also disregards journalistic ethics.

This is the Indian media platform, claiming to be the diaspora’s oldest platform, that carried the disinformation and hate targeting Professor Mohan Dutta spread by Hindu Youth in the form of a press release.

When it first carried the piece, the platform tagged Hindu community ‘leaders’ whose names started disappearing as we, along with other progressive Indian diaspora organizations, started pushing back at the disinformation spread by the Hindu Youth. 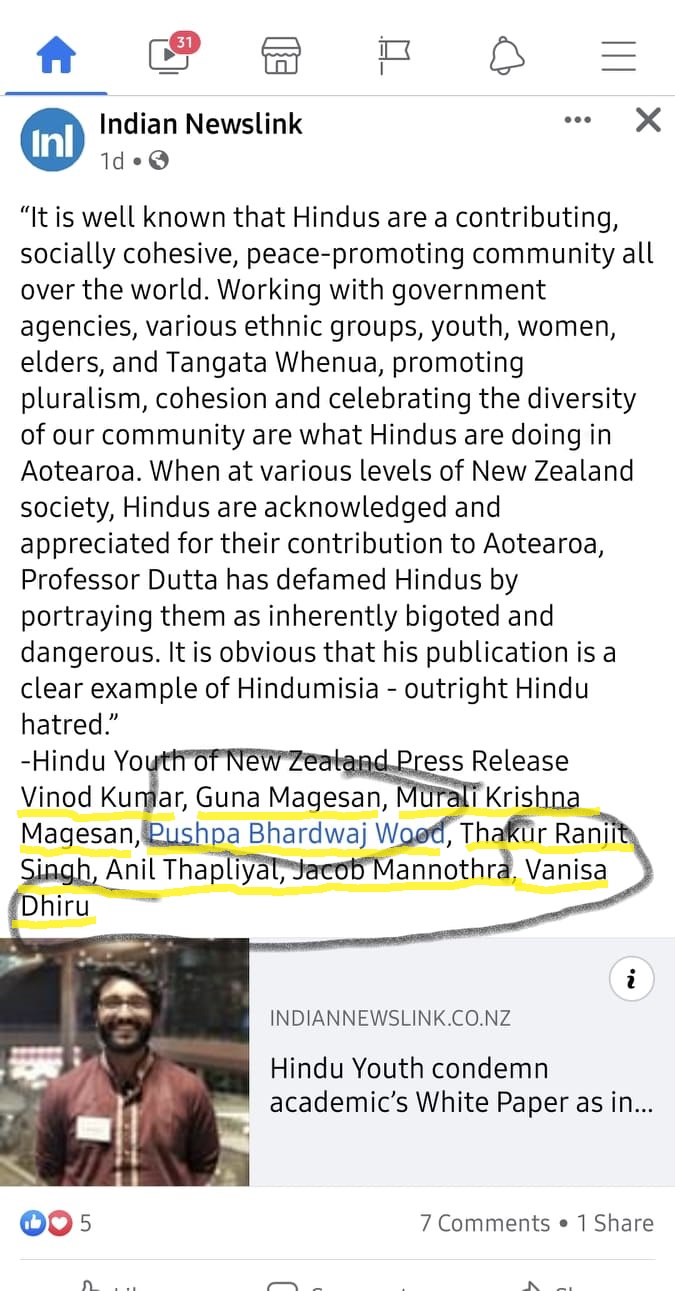 When AAPI submitted a counter letter to Indian Newslink, we never heard back from the editor.

On Saturday 26 February, AAPI held a protest in solidarity with hijabi Indian Muslim women in the Indian state of Karnataka. 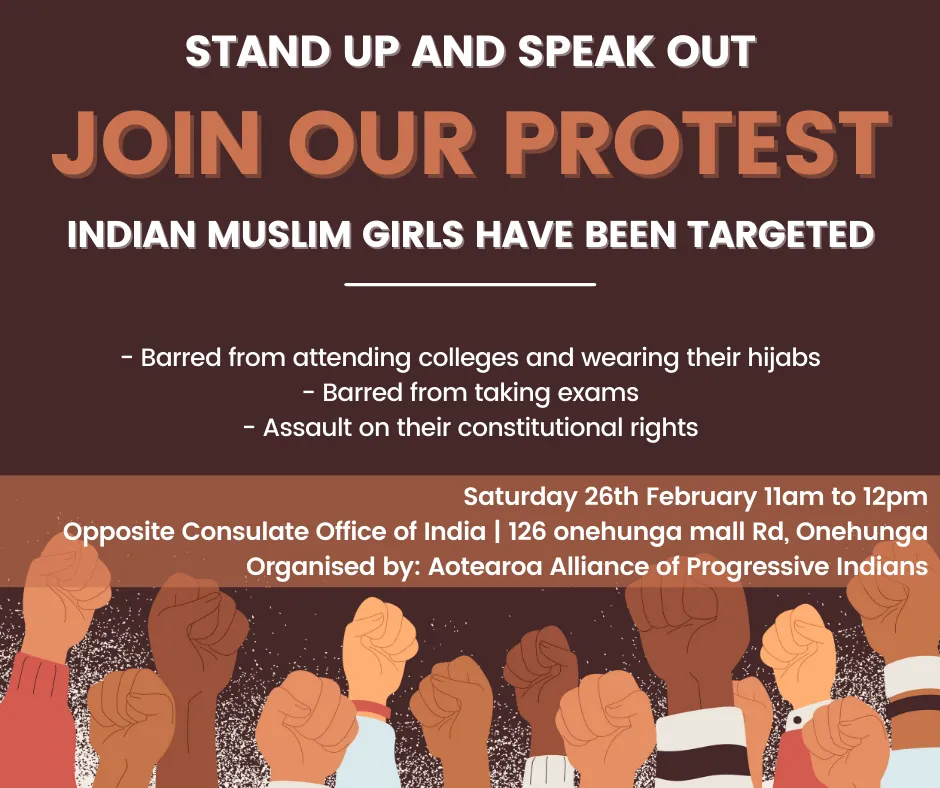 It was a gathering of all Indians, centred around Indian Muslim women, to protest and expand the sisterhood.

An unethical report full of erasure and untruth. 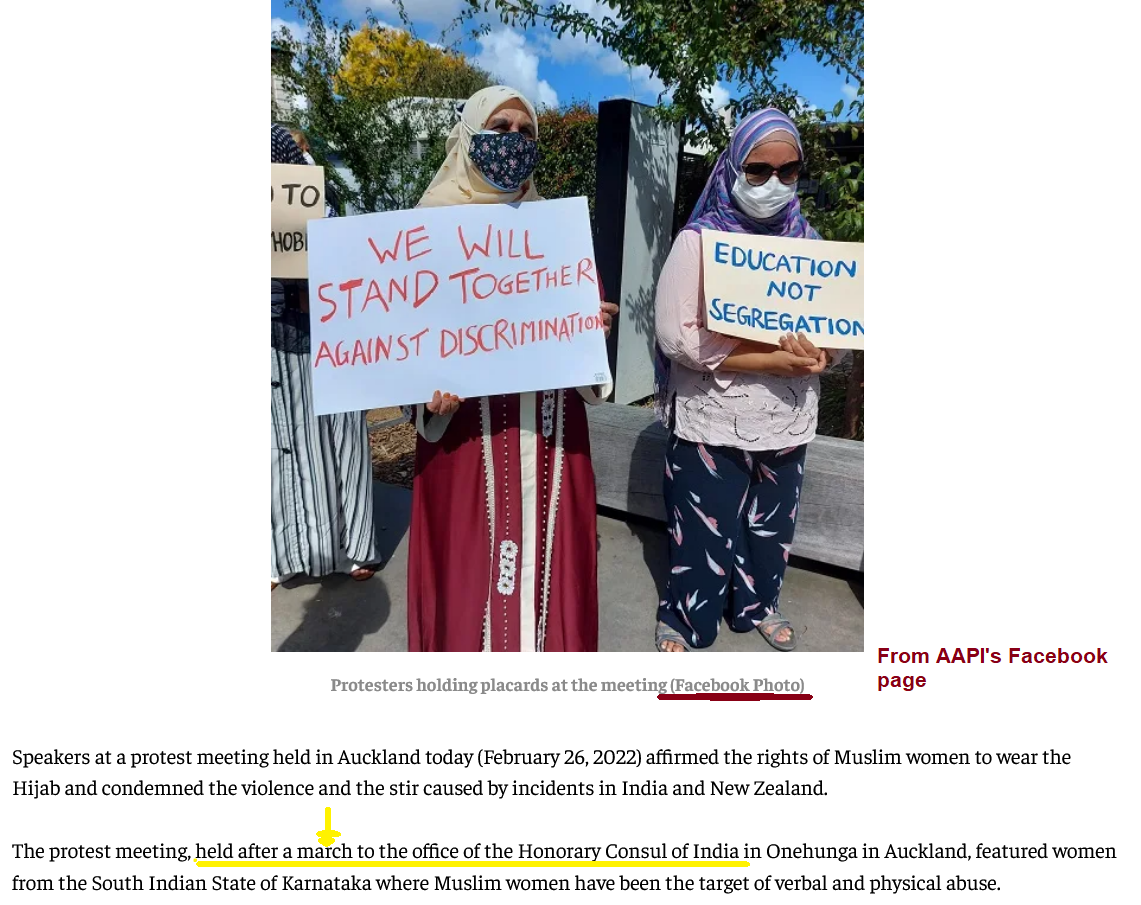 It says the protest took place after a march. Which is not true.

The article then goes on to say that it was ‘a result of an incident that sparked widespread protest in the South Indian State of Karnataka and another, seemingly related incident at the Otago Girls’ High School based in Dunedin.’ This is pure conjecture, conflation and trickery. 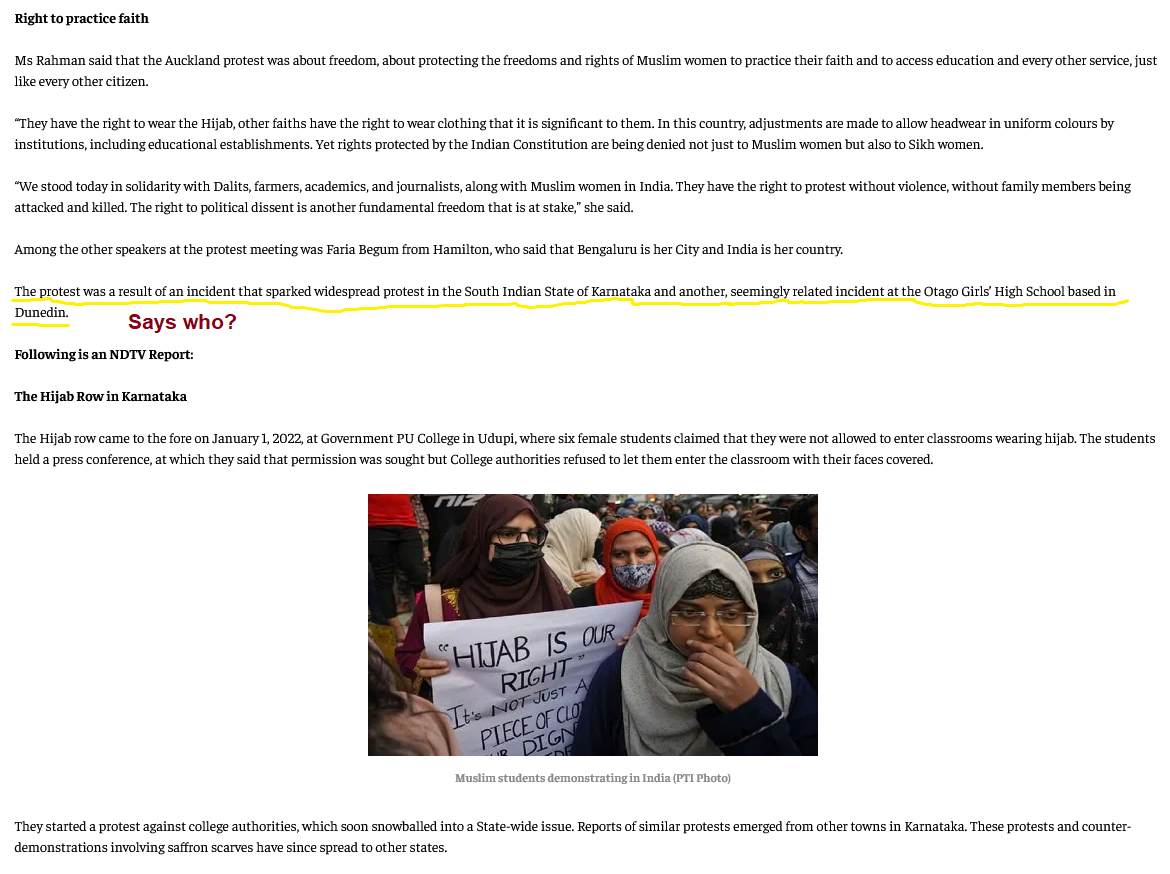 Finally, ALL the photos in this report have been grabbed from AAPI’s Facebook page without permission. 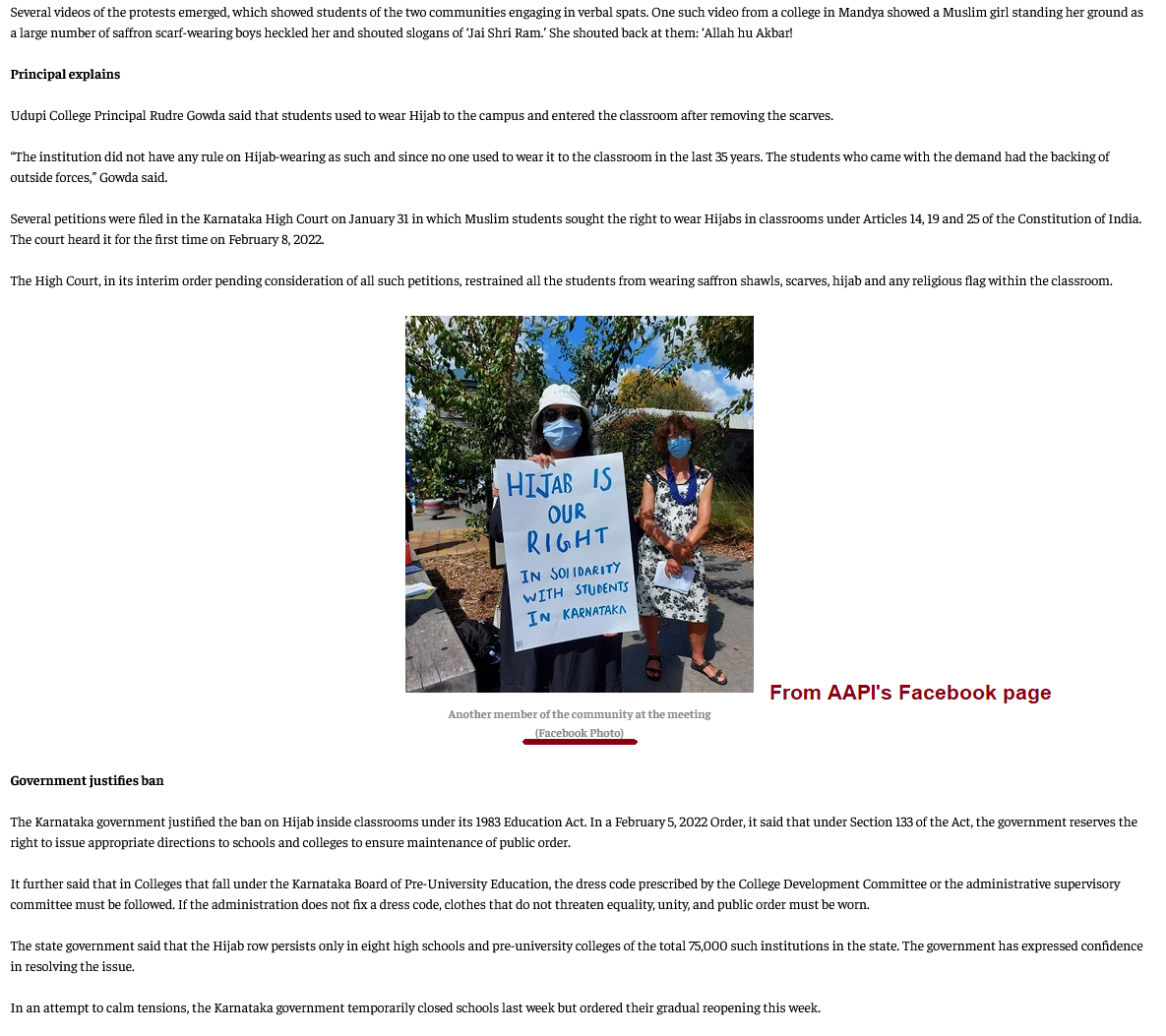 Let’s break this down.

Aotearoa Alliance of Progressive Indians is a group of Indians critiquing and questioning the erosion of democracy in India since 2019. While local Indian media focuses on endorsing the Hindu-isation of India, AAPI’s role is to shine a light on the vital, pluralistic, democratic, socialist, secular republic that India is and can be.

By not acknowledging the organisers of this protest event, Indian Newslink obliterates the diverse voices registered through AAPI. Much like Hindutva leaders who occupy the spaces of power and control in the Indian diaspora, all the diaspora Indian media aligned with Hindutva actively works to erase various progressive views from the community that challenge the misogynist hate politics of Hindutva. This enables narrative monopoly to project the Indian diaspora as a singularity.

The erasure of gender diverse communities, women, Dalits, Muslims, and progressive socio-political organizations in the diaspora is integral to upholding the structure of the Indian diaspora as a conservative space controlled by upper caste, economically solvent, largely Hindu men.

By presenting individual voices of Indian Muslim women participating in the protests it not only otherises them but also removes supportive infrastructures that anchor the multiple identities we have as Indians and mobilise against the politics of Hindutva.

Thus, singling out and individualising protest participants with words such as ‘featured women from the South Indian State of Karnataka’ reifies the power of the Hindutva surveillance state. And invisibilizing the organisers maintains that power.

The article begins with false information. That there was a march before the protest.

Then it mischievously states, “The protest was a result of an incident that sparked widespread protest in the South Indian State of Karnataka and another, seemingly related incident at the Otago Girls’ High School based in Dunedin.” This construction is devoid of the framing of the overarching Islamophobia that drives the attack on women’s right to wearing hijab both in Karnataka and Dunedin. It intentionally conflates the purpose of the protest as overreach. In fact, nowhere does the article mention Hindutva or the white supremacy that breeds Islamophobia culminating in violence on Muslim women’s bodies.

This loops back to the erasure. Because to seek permission to publish the photos, Indian Newslink would have to contact AAPI and by contacting AAPI it means recognising the collective and having to answer questions about the purpose of this article. It means not lying about a march or individualising and otherising Indian Muslim women, it means not conflating. It means Indian Newslink would be required to do due diligence.

None of which is obligatory while working in the Hindutva space yet exert their privilege to do a report on the protest.

AAPI received an email from the editor of Indian Newslink after the protest was over demanding to know more about the protest. 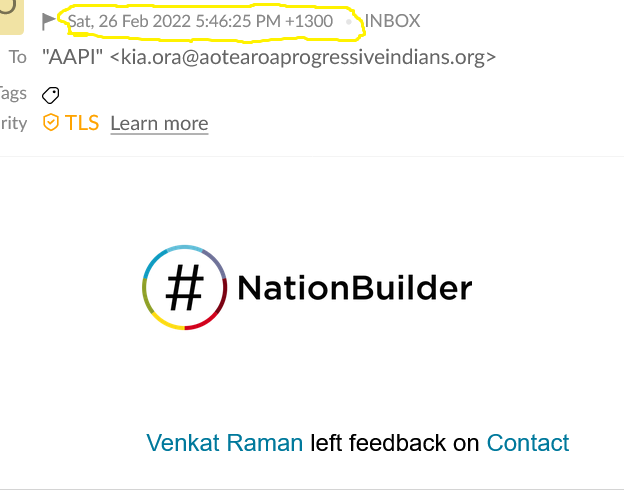 It clearly demonstrates the lack of due diligence and the entitlement of local Indian media. A report about the protest ticks the box about ‘balance’, that Indian Newslink does indeed make space for ‘others’. But how does a journalist do their research? How do they use language to frame issues? Is this email ordering AAPI to explain why the protest was organised?

This insidious game of speaking from both sides enables Hindutva media in the diaspora to cozy up to politicians, be in their good books, and curry favours. The politicians too (particularly from parties posturing progressive politics) can conveniently align with the Hindutva media, pointing to the platform’s coverage of a protest against the attack on Muslim women’s right to wear the hijab.