Finding ourselves as targets of a Hindutva disinformation plot.

We at AAPI woke up on a mid-week morning to a diagram that located us and Professor Mohan Dutta in what is called a “Red-Green Ecosystem.” The diagram has been tweeted by a white Hindutva espousing yogini in Australia, Sarah L Gates, who has been the key player in the dissemination of the Hindutva disinformation campaign in Australia and Aotearoa.

Presented as a flowchart, the diagram of boxes and circles placed us within networks, connecting us to other activists and organisations globally challenging the hate politics of Hindutva. 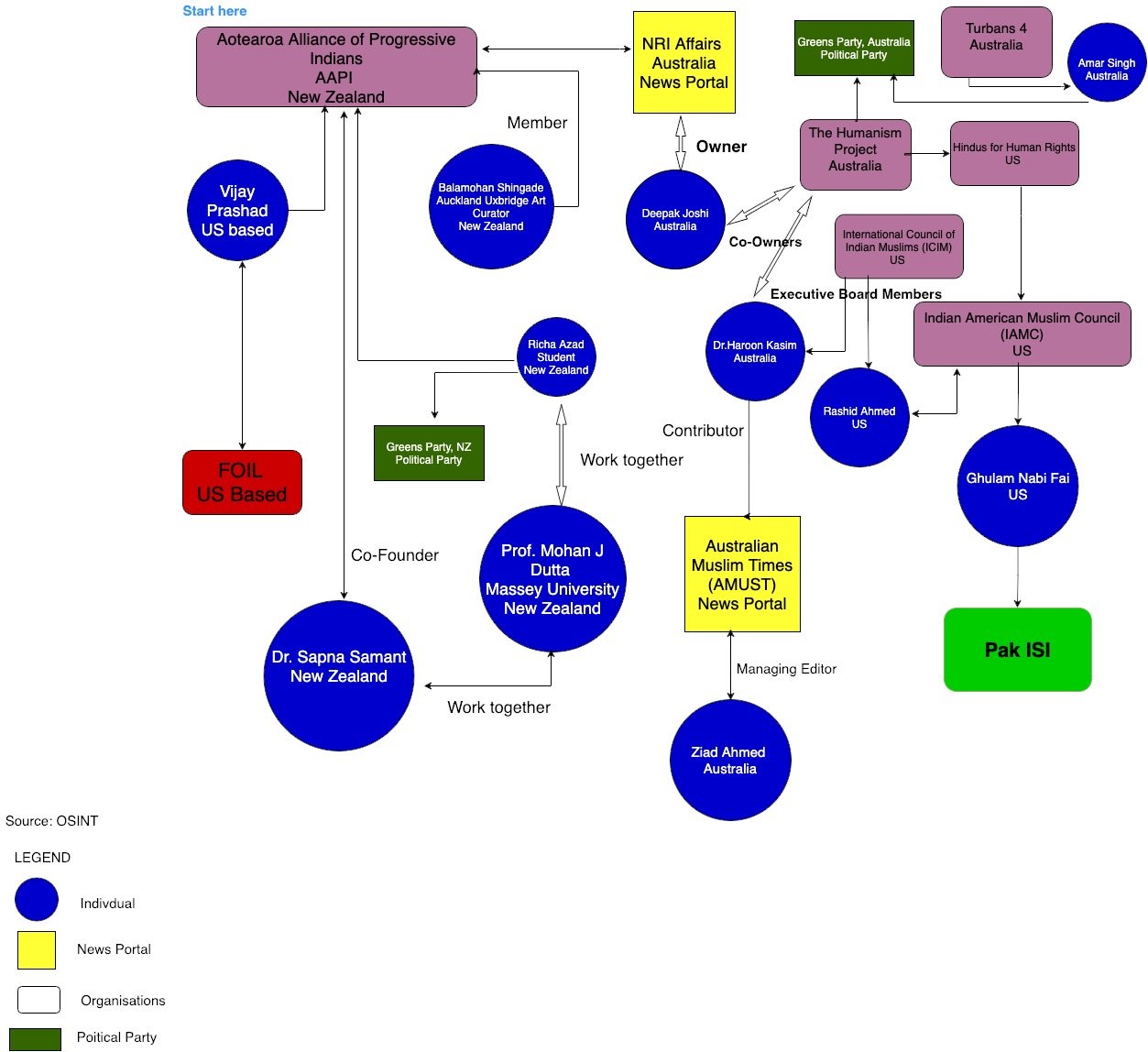 The diagram created by the Stop Hindutva Hate Advocacy Network (SHHAN) is hilarious in the wild goose chase it pursues. It is a classic example of disinformation, connecting AAPI to the US-based Professor Vijay Prashad and FOIL, folding in The Humanism Project in Australia that has been challenging there the spread of Hindutva, and linking up Hindus for Human Rights, an organisation that started in the U.S. by challenging the destructive effects of Hindutva on Hinduism.

The flowchart then goes into the favourite targets of Hindutva, Muslims. It ropes in International Council of Indian Muslims (ICIM) and Indian American Muslim Council (IAMC). The preposterous claims made by the diagram then connects Hindus for Human Rights through IAMC to the favourite bogeyman of the fascists, Pakistan ISI.

The disinformation campaign is ominous in its mirroring of strategies of seeding disinformation planted by the digital ecosystem and pro-fascist media in India to silence, intimidate and incarcerate dissenters.

Disinformation campaigns and silencing of dissent

Recall how the Indian youth climate activist, Disha Ravi, a founder of the Indian branch of Fridays for Future, a global youth-led protest movement created by Greta Thurnberg, was harassed and arrested by the Modi regime for allegedly creating a toolkit in support of the Farmers’ Protests in India in opposition to the draconian Farmer Bills seeking to loosen the policies around the sale, pricing and storage of farm produce that have protected farmers from the free market amidst the aggressive neoliberal reforms.

The toolkit was tweeted by prominent youth climate activist Greta Thurnberg and had drawn global attention to the repression of farmers by the Modi regime in India. A tweet by the superstar Rihanna placed the farmer protest on the global map and drew the wrath of the digital armies and media ecosystems of Hindutva, and unsettled the Indian government.

The strong and principled protests of the farmers sustained over a year and in the face of a wide array of repressive strategies used by the regime, is one of the most vital ongoing sites of dissent against the Hindutva apparatus.

Ravi was charged of sedition for allegedly seeking to wage war against India, with disinformation strategies connecting her to the journalist Pieter Friedrich who has been exposing the workings of the Hindutva networks in US politics. In an interview, Friedrich had noted that he did not know Disha and the other youth activists who were targeted.

SHHAN is an Islamophobic anti-Christian Hindutva organisation with an online presence. It projects its objective as tracking individuals and organisations that it labels as advocate hatred toward Hindus.

Under the guise of tracking Hinduphobia, it does the propaganda work of Hindutva, creating a list of individuals and organisations that are critical of the Islamophobia that makes up Hindutva.

In the section “about us,” the organisation spells out its Hindutva ideology.

Including snippets of video conversations from the Hindutva ideologue, Tejasvi Surya, who is alleged to have delivered/tweeted hate speeches targeting Muslims in the past, the website defines Hindutva as the following:

“Hindutva is an intellectual, political, socio-response, of Hindus to prevent themselves from aggression, predation and proselytisation from semitic Abrahamic faiths like Christianity and Islam.”

Note here the framing of Abrahamic faiths like Christianity and Islam as aggressive, predatory, and proselytizing.

In response to the question “What is the need for Hindutva?” the site goes on to paraphrase Surya,

The framing of Abrahamic faiths as aggressive serves to project Hindutva as a defensive response.

The twitter handle of SHHAN @HinduHate follows the twitter handle of Kapil Mishra, a local Hindutva politician in Delhi whose fiery speech targeting the protests against the draconian Citizenship Amendment Act (ACT) played a key role in the Delhi riots.

What can we do?

In any instance we see diagrams, stories, links thrown at us that project some form of “othering” (such as in the figure above targeting AAPI connecting us tenuously to the Pakistan intelligence agency through Hindus for Human Rights), we should closely look at the story being offered. We should ask, what is the pattern of storytelling here?

We should then look for evidence for any of the pieces of information being offered to create the story. Disinformation campaigns are built on lies, and just a little digging under the surface will expose the lie.

In the diagram for instance, ask what is the organisation “Hindus for Human Rights” and what does it do? A little research from credible sources will reveal that this is an organisation created by Hindus who seek to take back the religion from the hate politics of Hindutva.

The Hindu community in Aotearoa has been the target of Hindutva strategies over the past decade, and these forces have been emboldened by the Bharatiya Janata Party (BJP). Asking critical questions is the first step to countering the influence of this hate politics that unfortunately leverages digital platforms such as Facebook and Twitter to work across borders in spreading hate.