A Response to the High Commission of India in New Zealand

​​It comes as a shock to us that on October 7th the official Facebook page of the High Commission of India in New Zealand (HCI) shared misinformation, false reporting, and propaganda video aired by the Apna Network. Apna’s journalist Roy Kaunds has been regularly scrutinised for the spread of fake news as well as questioned for content that is bigoted, hate mongering, Islamophobic, and misogynistic. (See Byron Clark’s investigations on Webworm. Link and images below)

Apna’s video is another in a series of Kaunds’ highly problematic reporting, this time allegedly in response to the NZ Herald’s articles on the existence of Hindutva (Hindu Nationalism) in New Zealand, and the scholarly work of Prof. Mohan Dutta, Massey University, particularly his white paper “Cultural Hindutva and Islamophobia” (May 2021).

Primary among the insidious narratives Kaunds employs is the false conflation of Hindutva (Hindu Nationalism) with Hinduism, Hindu peoples, and Indian New Zealanders in order to obfuscate, distort the matter of facts, and ultimately aims to silence the critique of Hindutva. Kaunds’ report is unjustifiable. It misconstrues what is at stake in NZ Herald’s articles and the scholarship of Prof. Dutta, which is the unmistakable presence of Hindutva (Hindu Nationalism) in Aotearoa New Zealand, and the circulation of Islamophobia.

That the HCI shared this video is deeply alarming since this official body is supposed to be aligned with the Constitution of India. However, the HCI’s active endorsement of Kaunds’ video is seen as a signal that the HCI intends to shift away from a commitment to the principles of secularism, which is at the heart of both the Indian and New Zealand democracies. Instead, it demonstrates the HCI’s complicity in the promotion of a “Hindu Rashtra,” as envisaged by the ideologues of Hindtuva such as the Rashtriya Swayamsevak Sangh and the Vishva Hindu Parishad.

Against the backdrop of these comments, AAPI would like to ask the High Commission of India in New Zealand the following questions: Before sharing the misinformation, false reporting, and propaganda aired by the Apna Network, did you communicate with Professor Dutta to solicit his views and to understand the white paper and its purpose? And did you communicate with the NZ Police to obtain the facts of Hindutva-aligned groups and individuals in Aotearoa New Zealand?

Not all Indians and New Zealanders subscribe to Hindutva (Hindu Nationalism), and consequently, such persons have the human right to non-discrimination in Aotearoa New Zealand. As per the Human Rights Act of 1993 Section 21(1), the prohibited grounds of discrimination includes “political opinion.” The consequence of HCI sharing Apna Network’s discriminatory content on Facebook indicates foreign interference in the matters of, and, poses a threat to academic freedoms and freedoms of the press in Aotearoa New Zealand. Furthermore, HCI’s endorsement of Apna Network’s video presents a personal risk to the life and livelihood of Professor Dutta.

We should like to know, as Indians and New Zealanders, whether you are complicit with the ideology of Hindutva (Hindu Nationalism), and its project of the “Hindu Rashtra,” which actively aims to undo the secular and democratic foundations as per the Constitution of India?

On the official Facebook page of the High Commission of India in New Zealand (HCI), 7 October 2021. 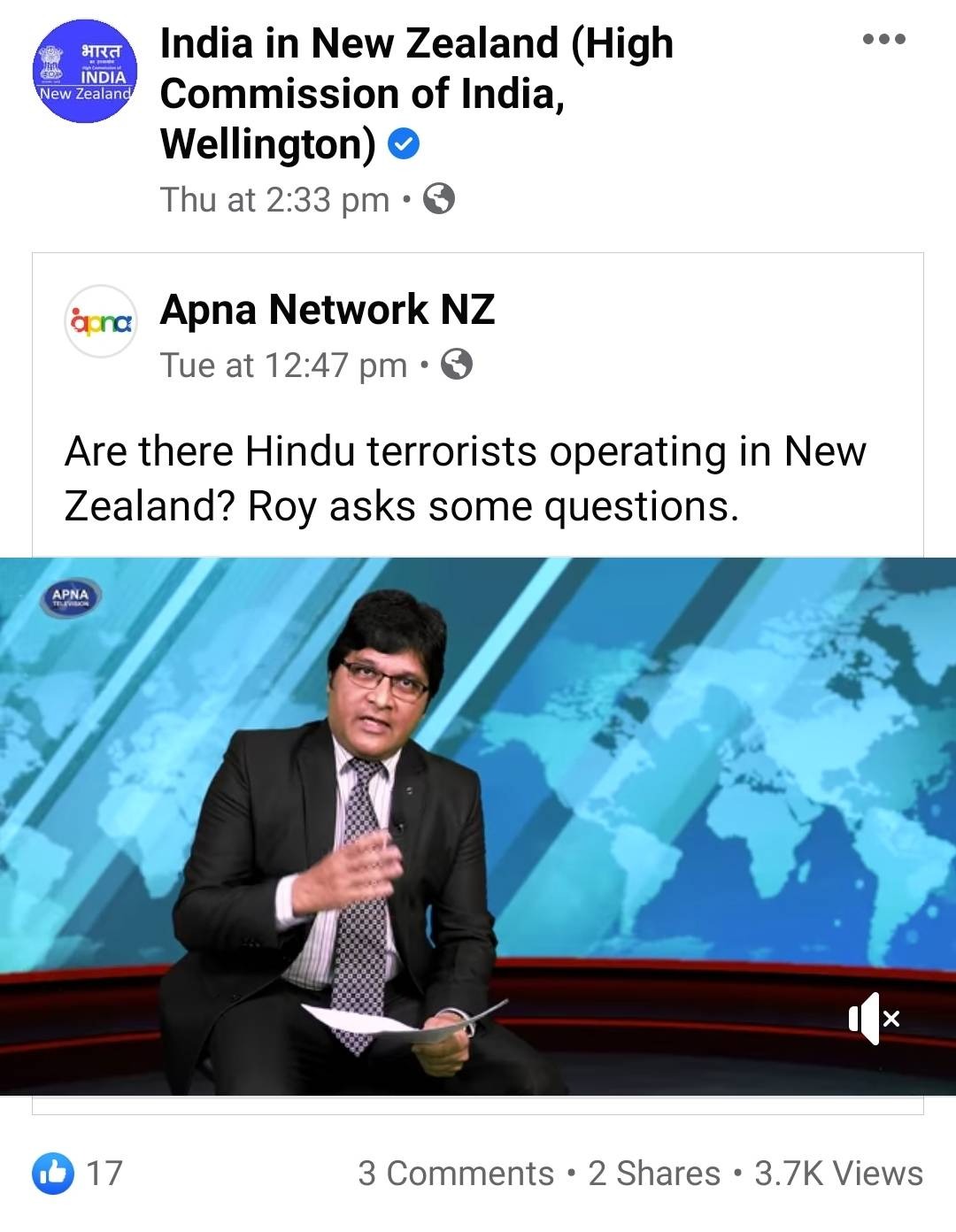 Below is an excerpt from part II of Byron Clark’s investigations into New Zealand’s fake news, which includes Roy Kaunds' deeply problematic journalism. For the full report, click here. 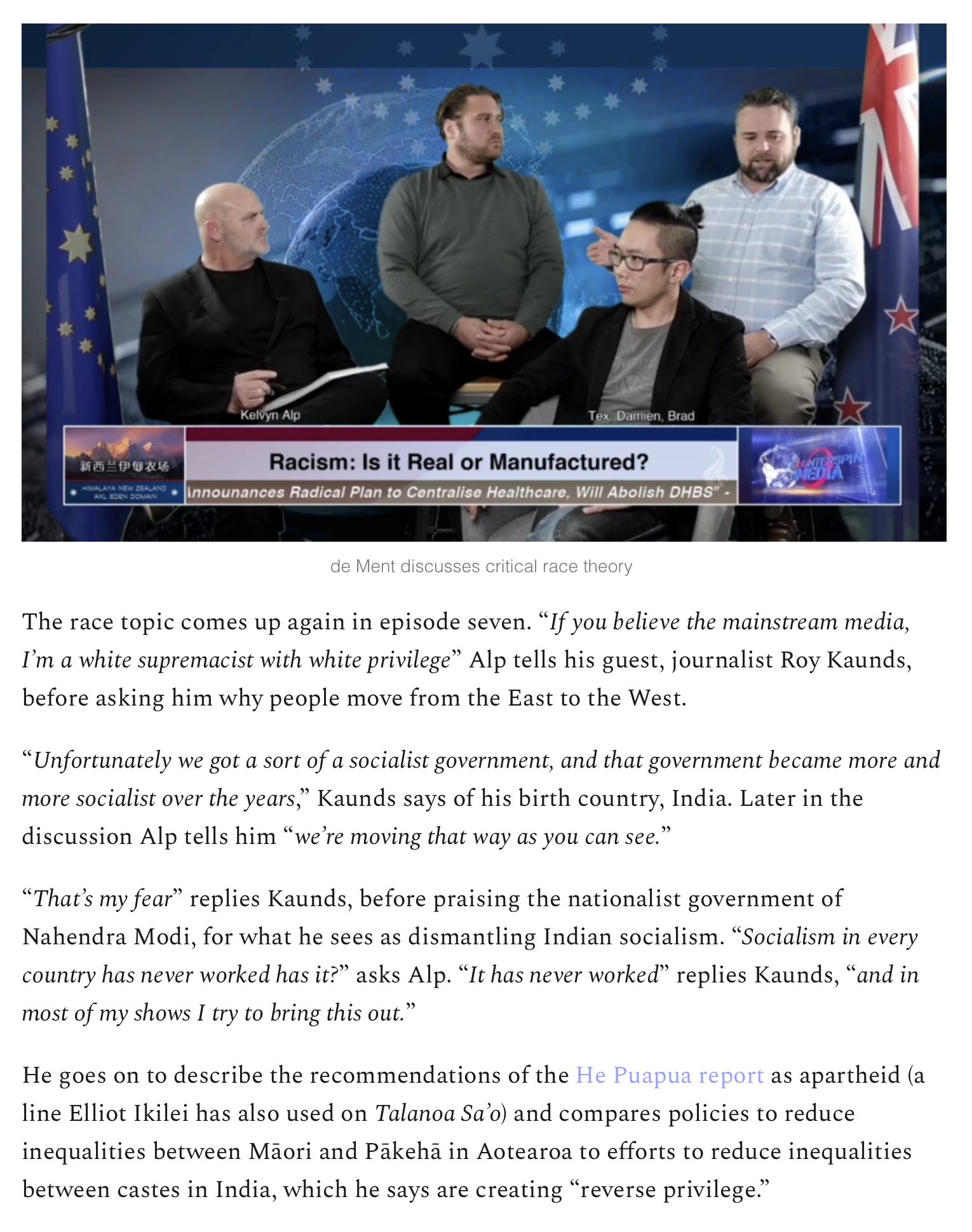 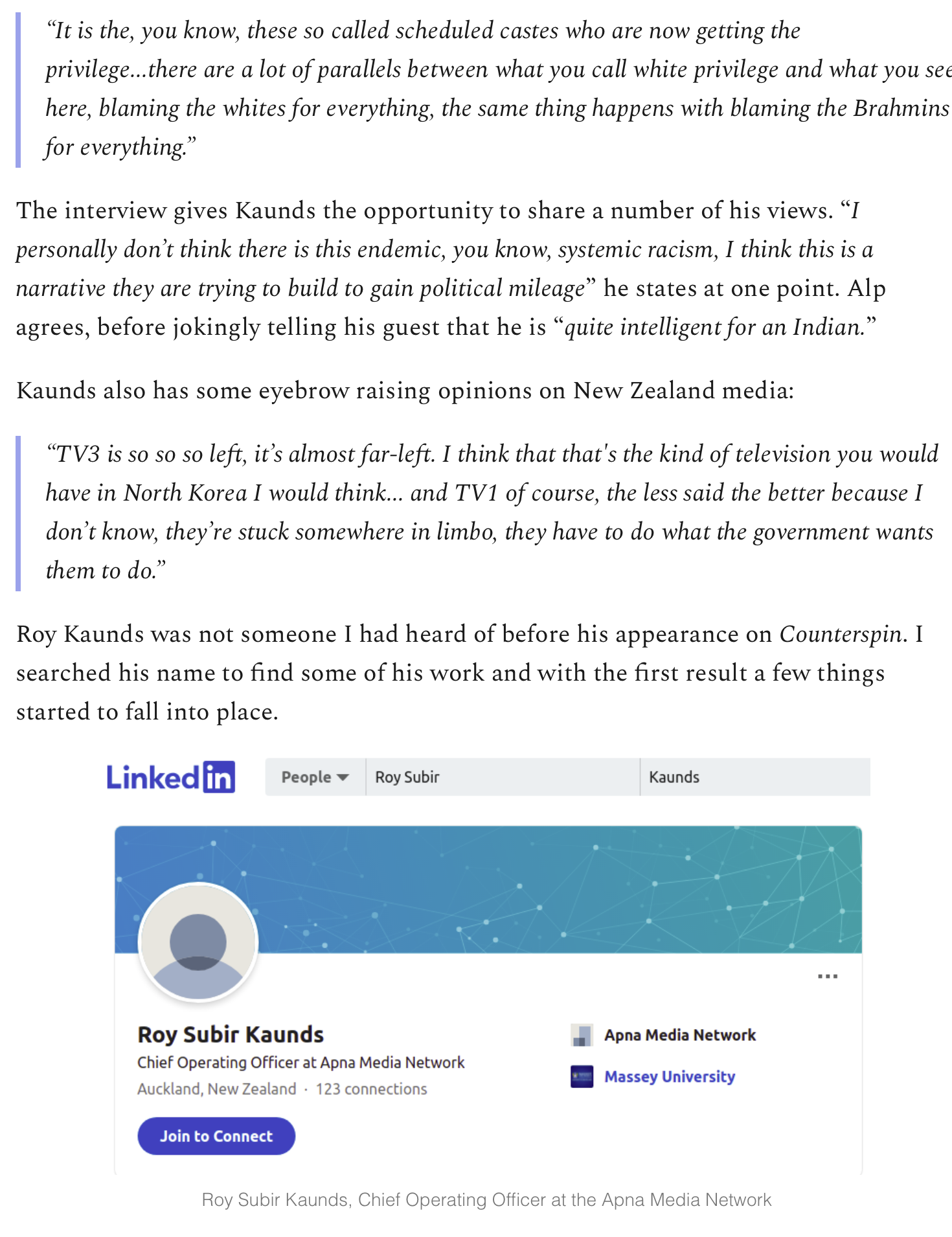 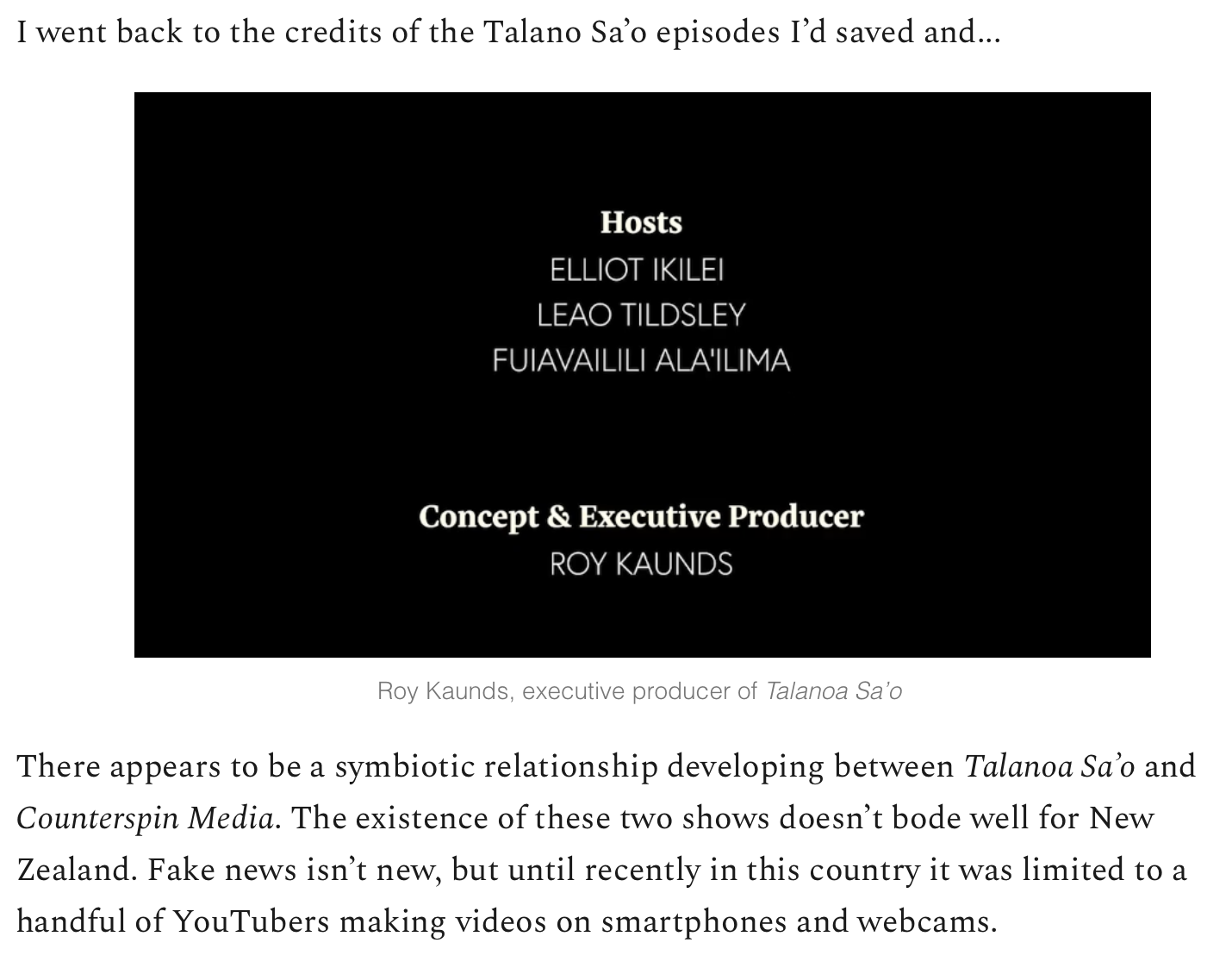