The Māori concept of whakapapa situates decolonising struggles in connections with ancestral origins. Referring to genealogy, as a fundamental principle of Māori culture, it offers the basis for a Māori person to claim their identity, connecting oneself to land and tribal groupings and to the mana of those.

Whakapapa serves as the basis for locating oneself, one’s knowledge, relationships, and practices in the context of ancestral teachings and practices.

As Indian origin activists in Aotearoa, we whakapapa to the diverse and plural spaces of India, connecting our lived experiences in Aotearoa with the strong traditions of democracy, secularism, and socialism that form the basis of the republic of India. Our struggles for the soul of India amidst the large-scale onslaught of fascist forces attacking its fundamental constitutional values are deeply intertwined with the ways in which we construct our identities as deeply connecting to the land, relationships, and commitments.

We remember the anticolonial struggles of our ancestors against the whiteness of British colonialism, resisting its divide and rule policies that seeded hate and inter-religious strife. Our resistance to the rise of Hindutva here in Aotearoa and at home in India is also a resistance to the ongoing colonial politics of whiteness.

White supremacy and Hindutva are intricately linked. Hindutva is a facsimile of the white supremacist ideology so rampant in Europe on the 1920s and was initiated as a project in 1925. Hindu ethno-nationalism aimed at purging Muslims and other but not the British colonisers. Hindutva organisations like the RSS never resisted British rule did not play a role in the mass freedom movement that eventually led to a secular, democratic India.

It is here that Indian origin activists in Aotearoa find their force and energy. A movement that the colonial politics of whiteness does not acknowledge as it cuddles up to the hyper nationalism of Hindutva in the name of Hinduism.

The everyday lived experiences of Indians, in India and within the diaspora, are syncretic and negotiated within the framework of culture. They own it, irrespective of region and religion.

The irony is both comic and deeply troubling that the whiteness of the colonizer conveniently takes up the identity of the Hindu to rally behind the divisive forces of Hindutva while at the same time driving up a campaign that silences Indians in the diaspora challenging the destructive forces of Hindutva by labeling them as Hinduphobic.

Australian white woman, Sarah L Gates, who set off a barrage of trolls against Professor Mohan Dutta is one such example. While flaunting her own Hinduism and seeking a Hindu nation for India, she chooses to ignore the lives and heterogenous practices of millions of Indians from the subcontinent and the ancestral struggle for an independent, secular, democratic India. Instead using violent language to attack their whakapapa all the while located in the white privilege of the settler colonialism of Australia.

The white Hindus portray themselves as more authentic, mimic the ‘Orientalist archetype’, hold up the conservative order and suppress the diverse voices of Hinduism. While being the white colonialist they are.

Sarah L Gates not only targeted Professor Dutta but also AAPI and the activist group“Hindus for Human Rights” for their ongoing dissent against the divisive forces of Hindutva that threaten the syncretism and pluralism of Hinduism.

She celebrates violent acts by Indians against other Indians in the name of Hindutva.

Recent Islamophobic tweets about the terrible attack on the Durga Pooja celebrations in Bangladesh also deny the complex history of the subcontinent, the Partition of India, Bangladesh’s own struggle to separate from Pakistan, the common Bengali culture so seeped into the daily lives of those who live there and in the diaspora.

The disinformation she creates and spreads is a security threat for several of us, including jeopardizing our links with India threatened by the authoritarian forces of a fascist regime.

That is the privilege of whiteness. To enter spaces of colour, appropriate and extract for one’s benefit, negate the histories and struggles of those people, and aggressively silence them.

For Sarah L Gates this bullying is immensely profitable in the digital networks of hate with Hindutva ideologues recognizing her as a ‘better Hindu’ than those fighting for the soul of India.

However, much like how our ancestors resisted the whiteness of colonialism, we will continue to resist Hindutva and its collaborations with whiteness/white supremacists to secure the syncretic, plural, democratic, and secular traditions of India. Because this is who we are. 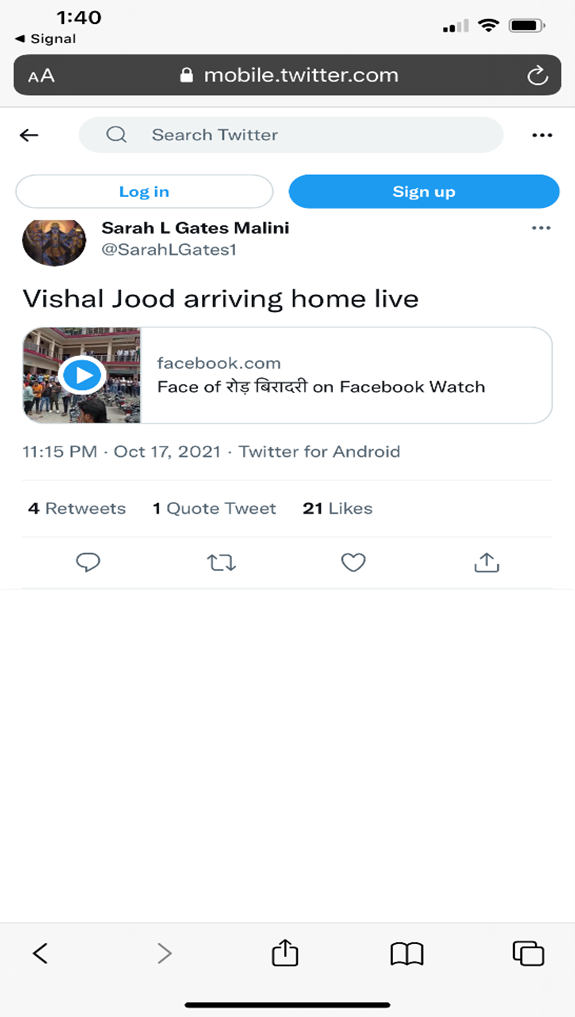