In its latest avatar, the Hindutva campaign targeting academic freedom, initiated by Hindu Youth and Hindu Council, has taken the form of an online petition. Having failed at their earlier attempts to silence academic freedom, the campaigners in their desperation are attempting to recruit Hindus to their hateful ideology by once again strategically conflating the fascist ideology of Hindutva with Hinduism.

As on the week of November 8th, 2021, a petition by Coalition of Hindus of New Zealand has begun on the website Change.org with the title “Support Hindu Community to have the freedom to follow cultural practices of Hindu Dharma.” The petition is intended “to New Zealand Parliament,” and the petitioners, “ask Massey University and its employee Professor Mohan J Dutta to cease and desist from such activities [...].” Their reference is to Prof. Dutta’s scholarship, including the publishing of a white paper in May 2021 titled Cultural Hindutva and Islamophobia. In this paper, Professor Dutta explains how narratives of Hindu supremacy help to prop-up a sense of pride in the Indian diaspora, and how this pride is intertwined with the circulation of Islamophobia.

Savarkar, who was the inventor of the term Hindutva and the founder of the movement, clearly stated that Hindutva is not Hinduism. In his text Essentials of Hindutva (1923), he rejected the term Hinduism and along with it the pluralistic religion it describes. As he wrote, “If there be any word of alien growth it is this word Hinduism and so we should not allow our thoughts to get confused by this new fangled term.” Instead, Savarkar vigorously promoted Hindutva and its core political objective of crafting India as a “Hindu Rashtra” (Hindu Nationalism). In the words of Savarkar, “a Hindu Rashtra where some Indians will be more equal than others.” In an interview in 1944 (here), Savarkar was asked by an American war correspondent, “How do you plan to treat Mohammedans?” Savarkar replied, “As a minority, in the position of your Negroes.” The fundamental value of racial inequality (jati) advocated by Savarkar is in order to create the idea of Hindu supremacy, which continues to form the basis of Hindutva today.

As Vinay Lal puts it (here) in his analysis of Savarkar’s contribution to 20th Century anti-colonial movement in South Asia, “Savarkar imbibed the worst of Western political and social traditions, and his warped ideas about race superiority, the survival of the fittest, and the nation as a “blood entity”, so to speak, were derived from the most objectionable strands of Western thinking. [...] If Savarkar is at all to be remembered, let it not be forgotten that as Nathuram Godse plotted to take Mahatma Gandhi’s life, Savarkar blessed him and wished him success in his God-given task.” The Hindutva ideology formed the ecosystem that led to the murder of Mahatma Gandhi.

Similarly, consider the writings of Golwalkar from his 1939 book: “German race pride has now become the topic of the day. To keep up the purity of the Race and its culture, Germany shocked the world by purging the country of the Semitic Races – the Jews. [...] a good lesson for us in Hindustan to learn and profit by.” In Golwalkar’s writings, it is clear to see how the ideology of Hindutva (Hindu Nationalism) was developed through sustained interaction with ideologues in Fascist Italy and Nazi Germany.

Hindutva is a supremacist force based on aggressive and strategic deformations of Hinduism, and an organized attack on the pluralistic character of India and its diaspora. Fascist in the classical sense, Hindutva threatens to strip the subcontinent of its pluralism and syncretism, of its many cultures and creeds. What’s more, the political ideology of Hindu Nationalism is opposed to and indeed aims to undo the secular foundations of India. Indeed, Hindutva is a global threat as it destroys all forms of stability in the subcontinent with repercussions far beyond.

We reiterate that Hindutva is not the same as Hinduism, and the false conflation of the two is a deliberate strategy of Hindutva, which aims to spread disinformation based on distortion, manipulation and obfuscation. (We have written about the difference between Hinduism and Hindutva in significant detail in our open letter on October 3rd, here).

Given the abundance of evidence on the difference between Hindutva and Hinduism, for the organisers of this petition to continue to pursue the narrative that the two are the same is a deliberate attempt to prop up their supremacist ideology. They have made this abundantly visible in their attempt to whitewash Hindu supremacists. Savarkar and Golkwalkar are to Indians what Adolf Hitler was to Germans and the world. Therefore, petitioning the democratic parliament of Aotearoa New Zealand to support falsehoods about Hinduism, and to further push Hindu supremacists as idols is a very dangerous exercise. It should not be summarily dismissed as a silly attempt out of desperation, but rather should be read as a Hindu supremacist propaganda that should be surveilled on an ongoing basis. We should be gravely concerned that these forces of hate feel so emboldened to target the New Zealand parliament, much like we should be concerned by the attempts of Trump supporters and QAnon conspiracy theorists in attacking the New Zealand democracy.

In the context of the petition, the one-off and contextless mention of Professor Zaheer Baber’s article Religious Nationalism, Violence and the Hindutva Movement in India (2000) demonstrates the petitioners’ persistent misreading and misrepresentation of scholarly work. Baber’s work is precisely on the violence of Hindutva. Here is an extract from Baber’s passages mentioning Savarkar: 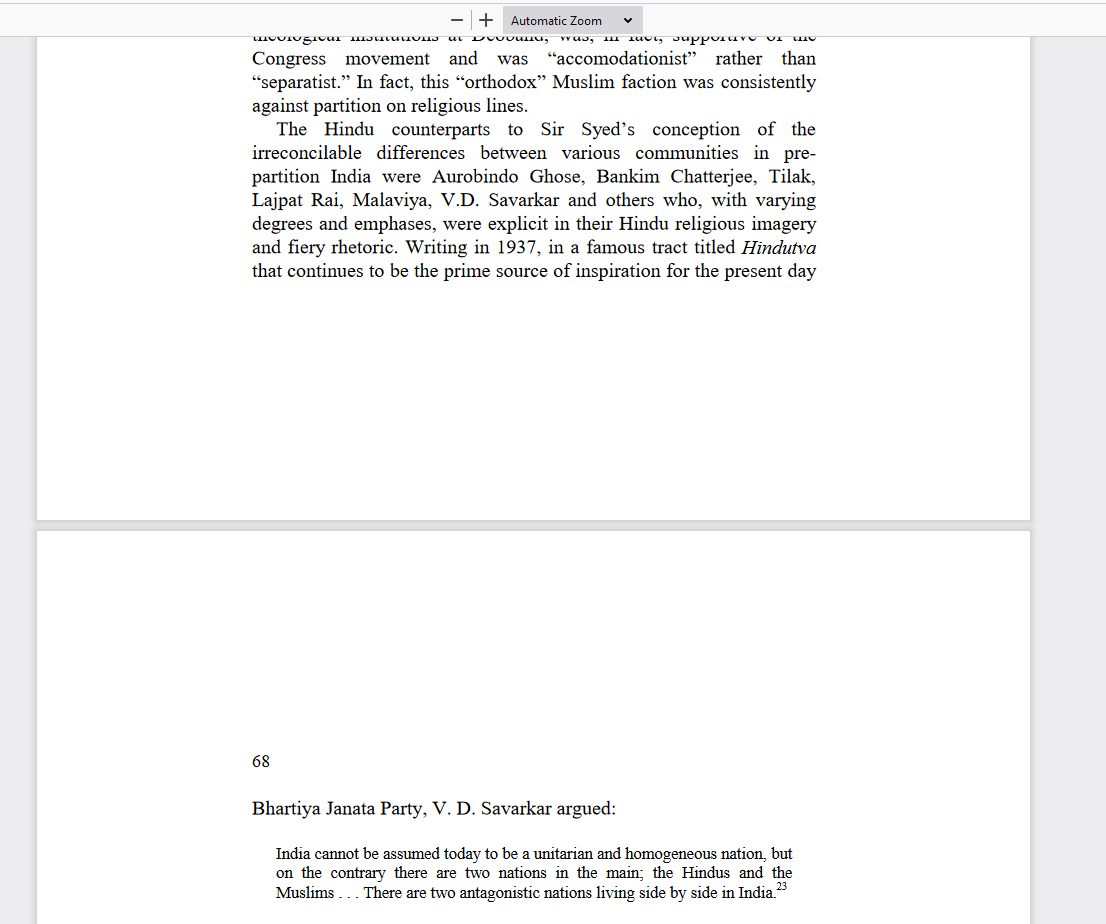