The Falsehoods Of The Hindutva Ecosystem In Aotearoa. Or, How’s That For Social Cohesion?

According to Gregory Stanton, the head of Genocide Watch, Islamophobic hate in India has reached genocidal proportions.

The film “The Kashmir Files” has further mobilized the hate ecosystem of Hindutva in India. This hate is evident in the mobs chanting slogans threatening violence toward Muslims. In cinemas, crowds of chanting people are seen calling for the killing and extermination of Muslims, for revenge to be taken against Muslims, and for Muslim women to be raped by Hindu men.

The film is set to release in Aotoearoa on 24 March 2022 and Muslim communities have voiced their concerns about security with the screening of the movie. These concerns should be read in the context of the trauma experienced by Muslims in Aotearoa on 15 March 2019 with the Christchurch terrorist attack. These concerns should also be looked at from the perspective of the Indian and Kashmiri Muslim whānau with Islamophobic genocidal hate being targeted towards them by Hindutva in India and in the diaspora.

David Shanks, the chief censor, is reviewing the film’s classification as standard procedure in response to these concerns. This review has allegedly delayed the scheduled launch date of the film on March 24.

And this delay, much like any potential critical evaluation of the Hindutva propaganda ecosystem, has become the target of disinformation. Within two days.

On March 18, the director of the film, Vivek Agnihotri, a Hindutva ideologue, tweeted:

See here how a legitimate process in Aotearoa is undermined and called an ‘undemocratic tactic’ while labelling the Muslim community ‘radical’.

The tweet as picked up and mobilized by Hindutva adherent Twitter accounts and Facebook pages in Australia and New Zealand. The Facebook page, “Hindus in NZ” that circulates Islamophobic hate, started mobilizing Hindus in New Zealand to speak up. 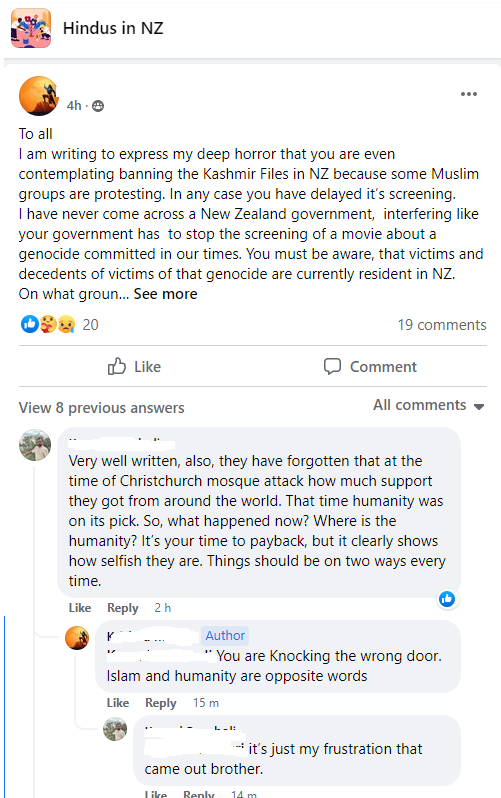 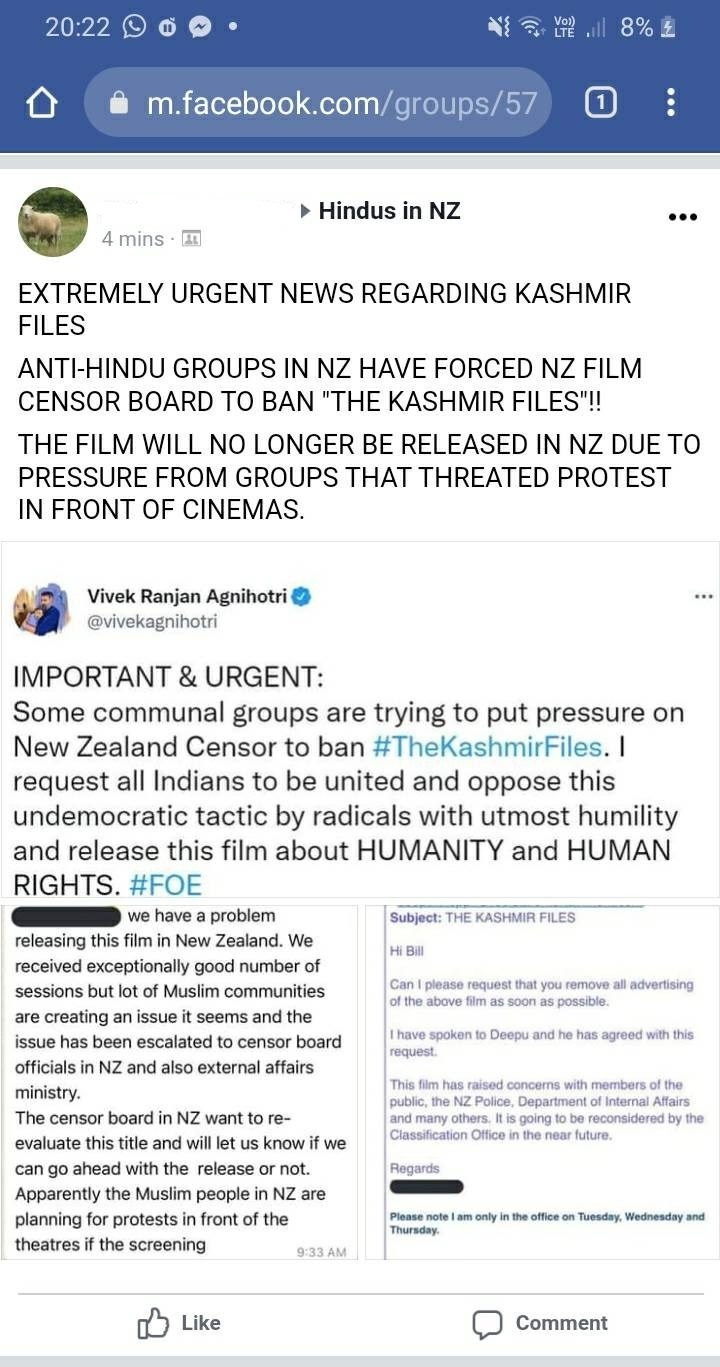 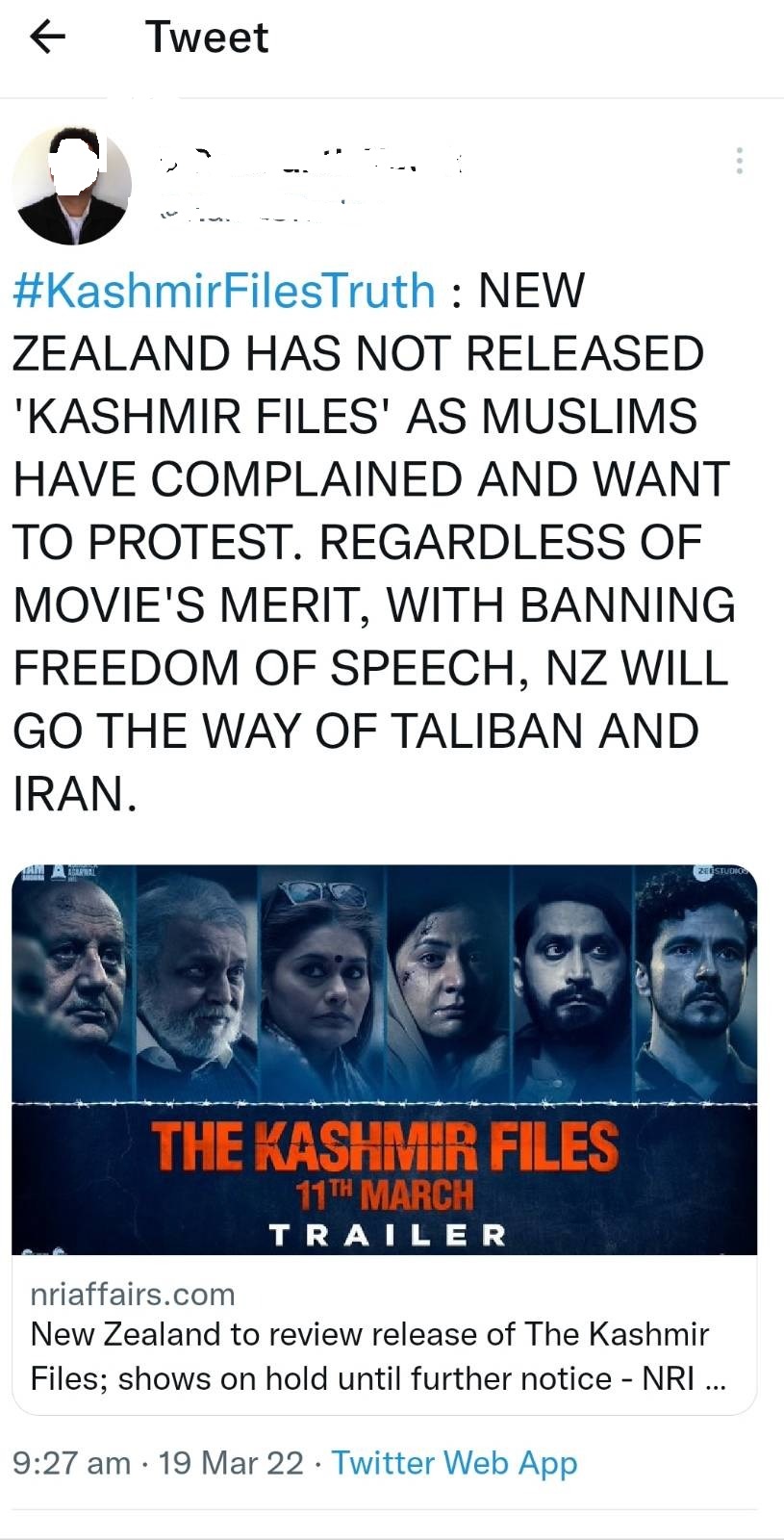 Hindutva’s resident white supremacist Sara L Gates jumped in to add her two bits, ironically mocking herself. She has mobilised Islamophobic hate before and has trolled Professor Mohan Dutta for a white paper he wrote on cultural Hindutva. 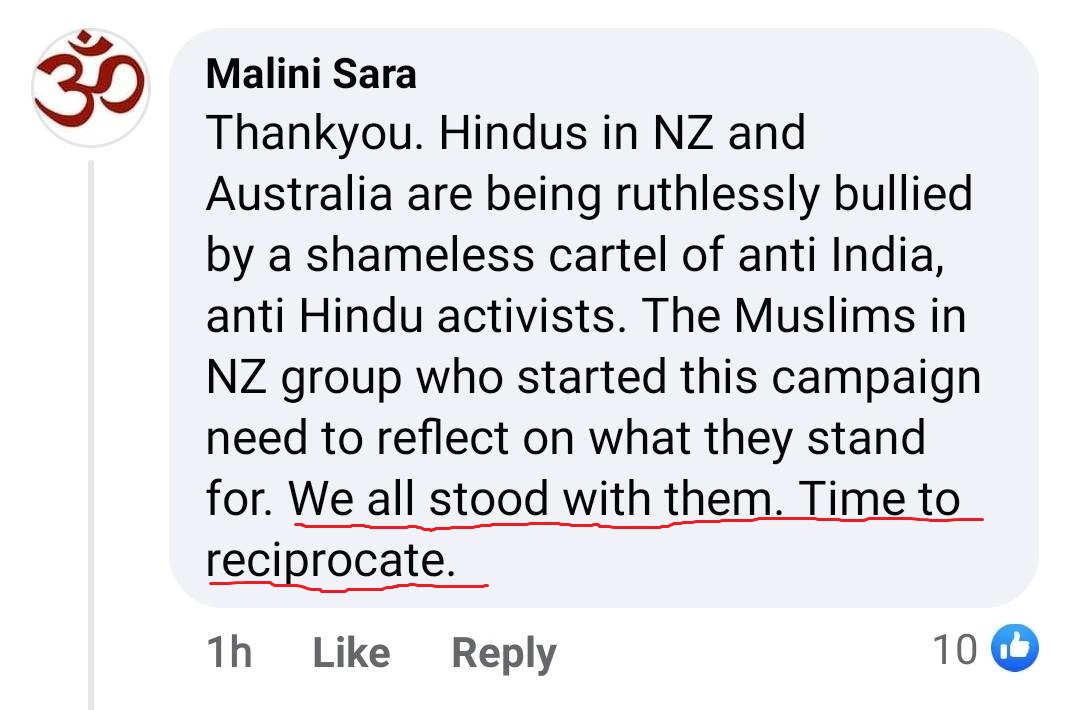 Three petitions were started over the weekend that continued to perpetuate Islamophobia. 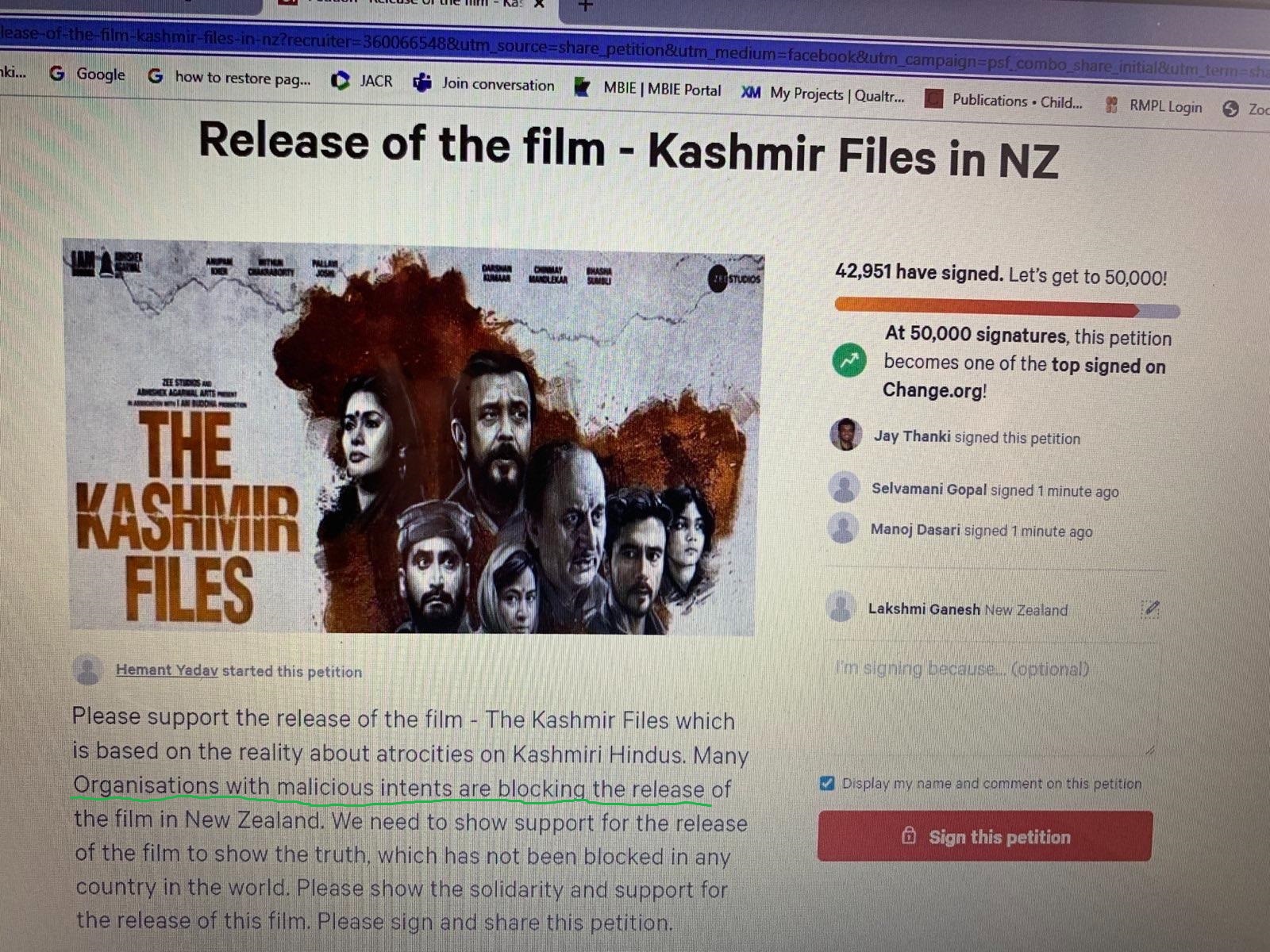 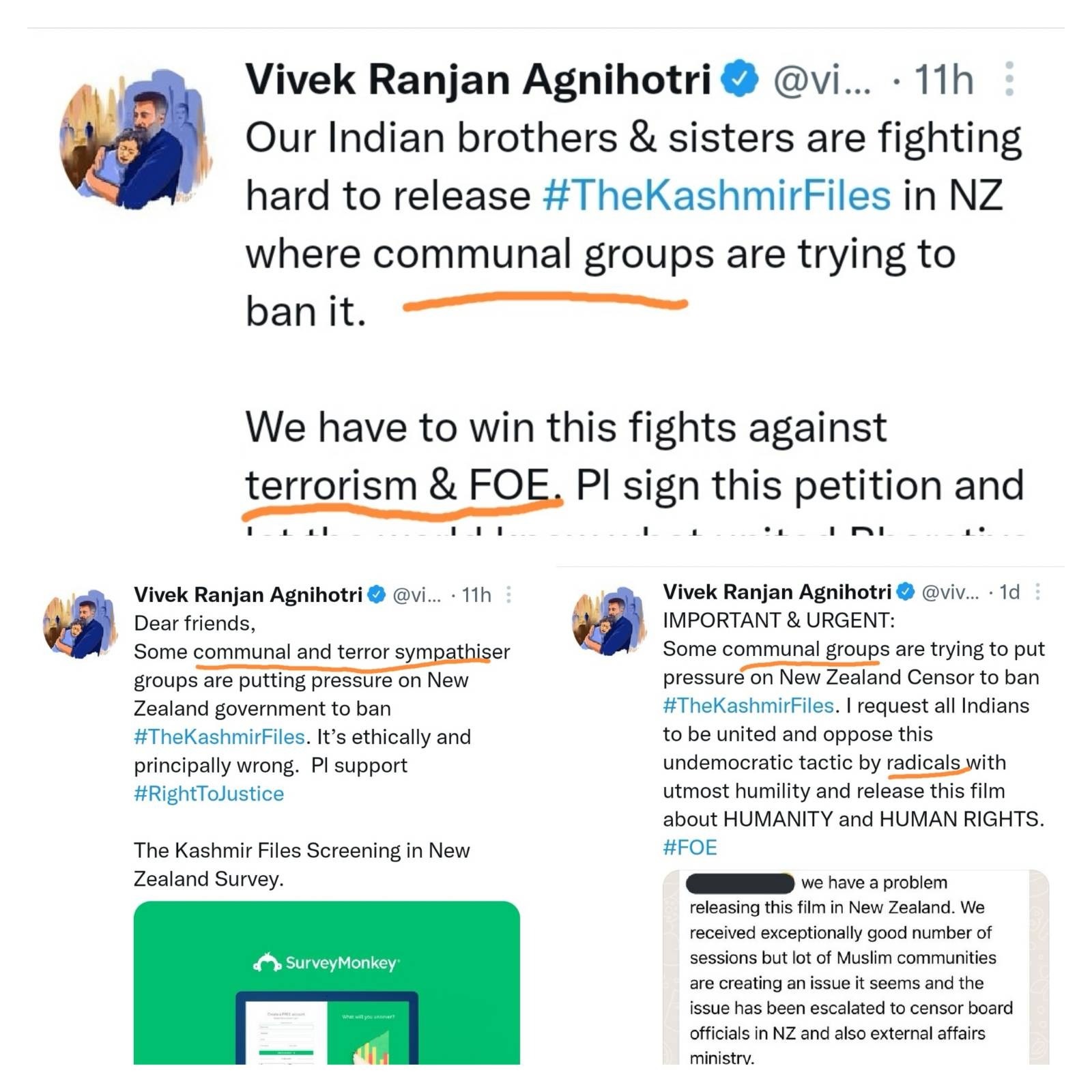 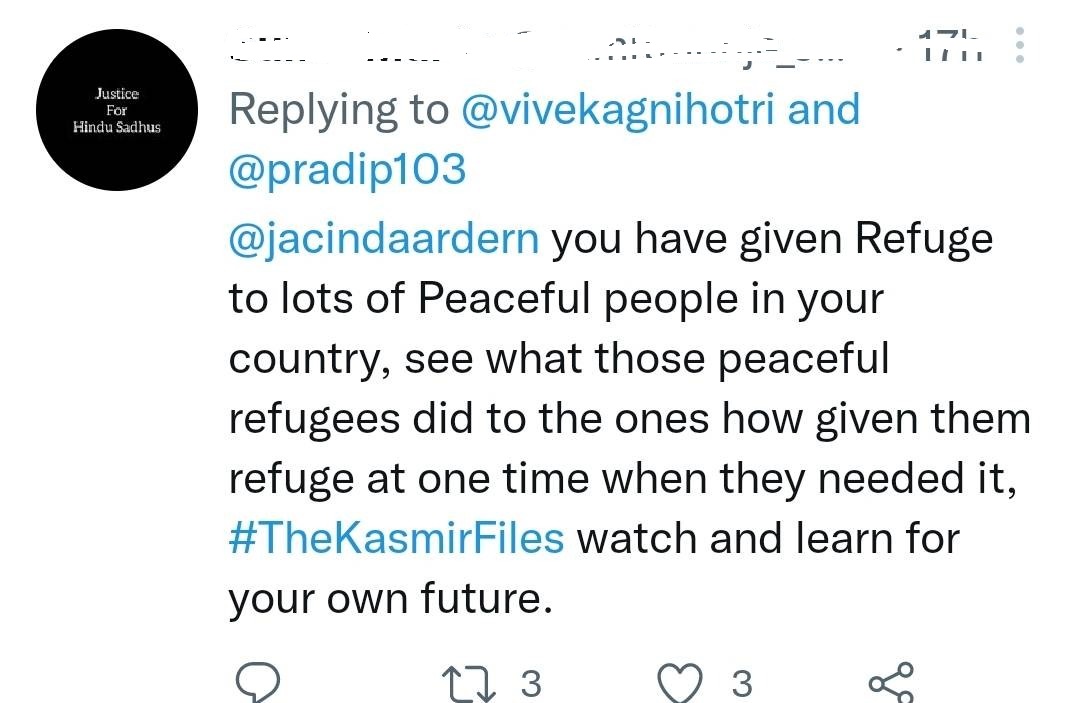 Opportunistic politicians jumped in just like they did with the anti-vax campers in Wellington. Winston Peters posted on Facebook: 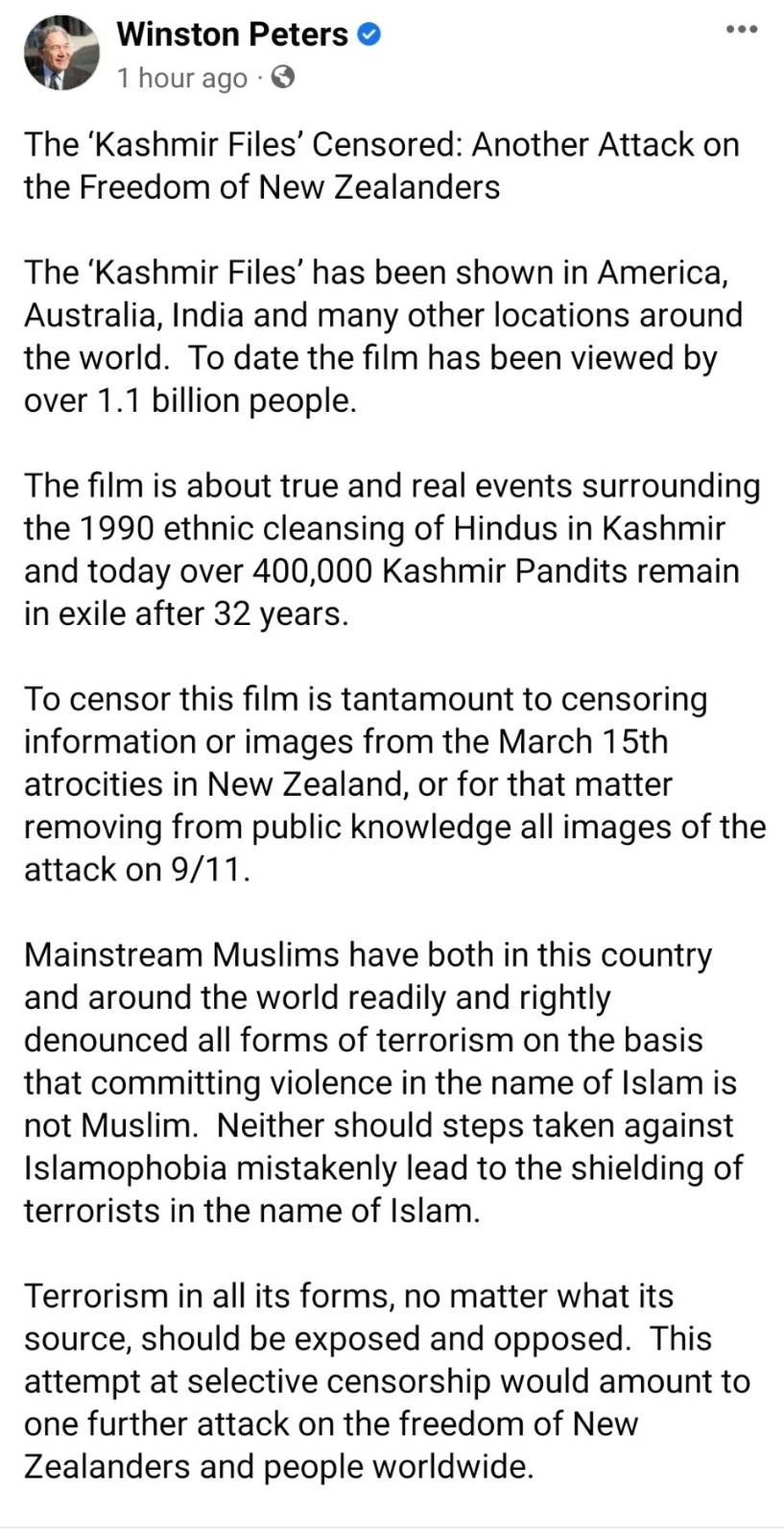 The post states, “The film is about true and real events surrounding the 1990 ethnic cleansing of Hindus in Kashmir and today over 400,000 Kashmir Pandits remain in exile after 32 years.  To censor this film is tantamount to censoring information or images from the March 15th atrocities in New Zealand, or for that matter removing from public knowledge all images of the attack on 9/11.”

Note here the deployment of disinformation to set up the propaganda. The post is shared by Mahesh Bindra, a former New Zealand First politician with close ties to the Hindutva hate organisation, Rashtriya Swayamsevak Sangh (RSS).

The post is picked up by right-wing Hindutva ideologues across the Indian diaspora in Aotearoa New Zealand. One such post made by Saten Sharma and tagging the Minister of Ethnic Communities, Priyanca Radhakrishnan, among others: 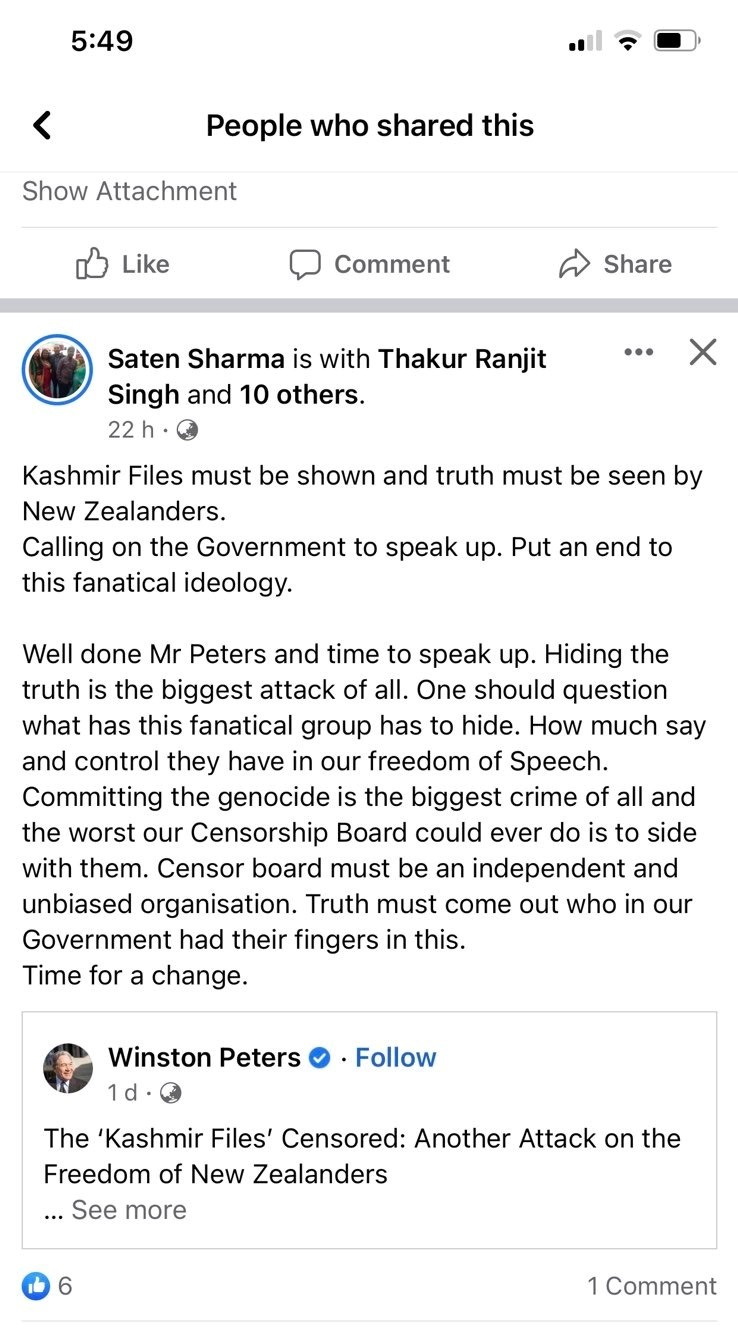 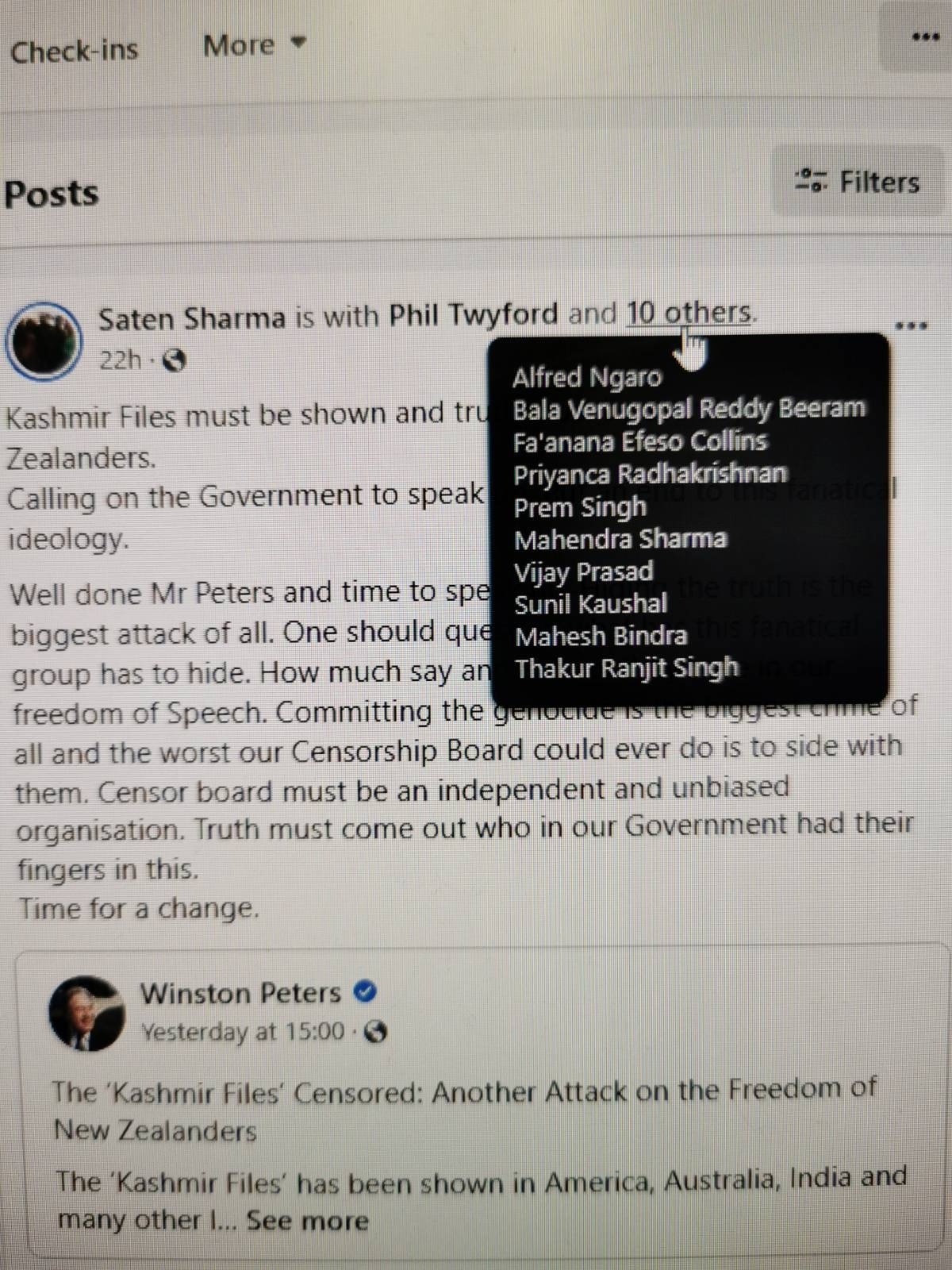 The issue was also picked by right-wing party ACT. https://www.act.org.nz/minister_tinetti_must_explain_unusual_kashmir_censorship

“The Kashmir Files is clearly controversial for some New Zealanders, but New Zealand is a country committed to freedom of expression. Furthermore, the film is widely regarded as being based on facts and has being defended by Indian Prime Minister Narandra (sic) Modi as such.

It appears some complainants have had the film censored but answer to uncomfortable issues is not censorship. The New Zealand Government should not try to resolve foreign disputes by censoring one side in favour of the other. If you come to New Zealand, you accept New Zealand values such as free speech.”

Observe here the way in which Seymour draws on the right-wing hate propaganda of Hindutva, in the form of the defense of the film by Narendra Modi, who has previously been condemned by global rights community for his alleged role in the Gujarat pogrom that led to the murder of over 2000 Muslims. His government has indiscriminately jailed activists, journalists, artists and whoever opposes his regime.

Another conservative MP, Melissa Lee of the National Party, chipped in. 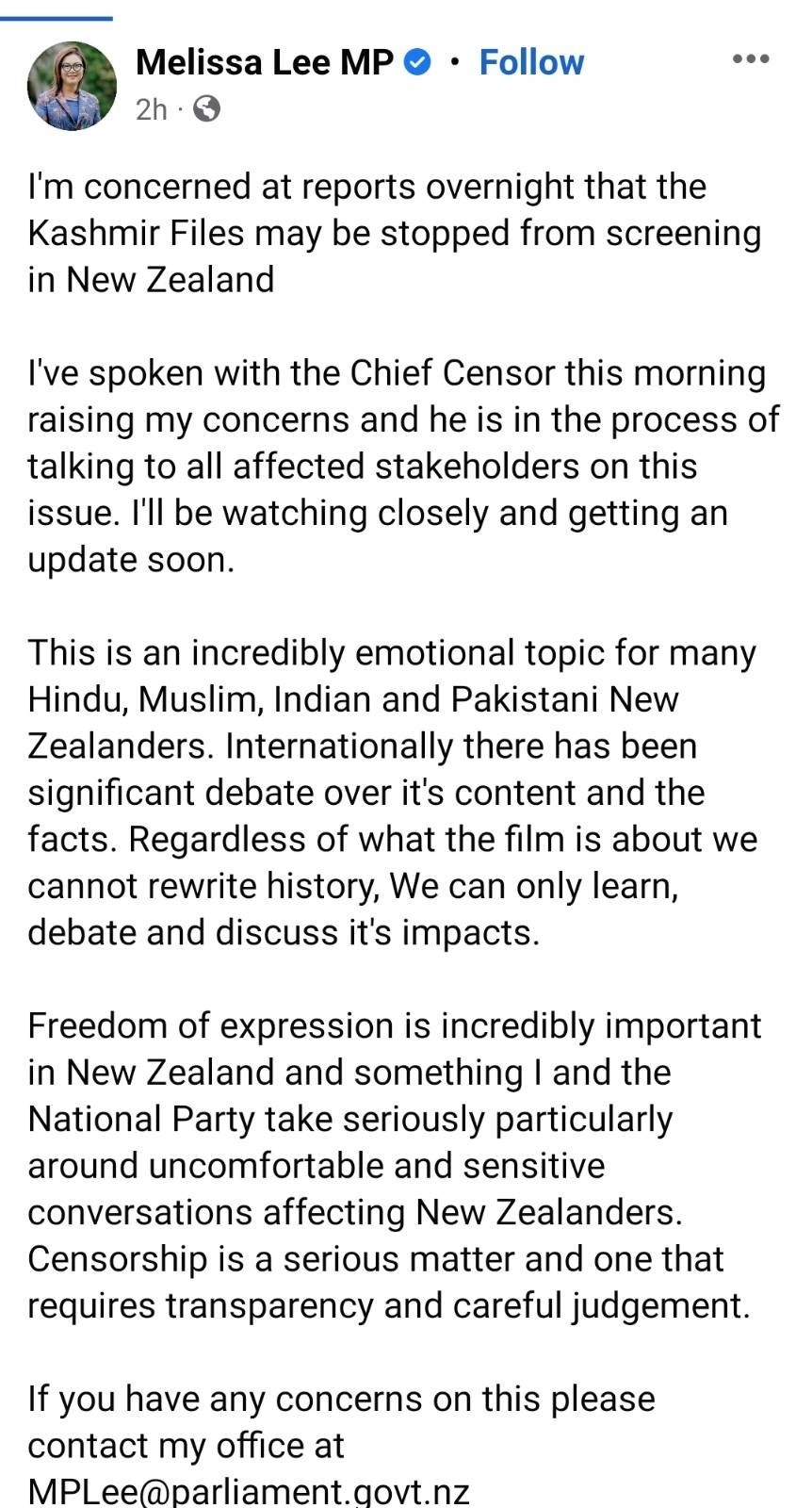 Note this meeting ground of the malcontents flying the flag of supremacy over the bogey of free speech and Seymour calling it a ‘New Zealand value’. Note also how the anxiety of the Indian Muslim community in Aotearoa is not even acknowledged.

Facts don’t matter in the Hindutva propaganda structures, and the disinformation infrastructures of right-wing political parties such as New Zealand First and ACT draw on the propaganda to fuel divisions in Aotearoa New Zealand.

“What the hell does David Shanks know about the Kashmir genocide? Has he studied it? He goes and makes some rubbish statements…this David Shanks appears to be a complete idiot.” He also calls the chief censor a “total, incompetent, nincompoop idiot”.

Muktesh Pardeshi, the Indian High Commissioner, in an interview with Indian Weekender, states, “If it is not creating disharmony in India, why should it create disharmony in New Zealand?”

The lie “There has been no issues anywhere….” moves from the right-wing propaganda networks to the attempts at influencing regulatory decisions in Aotearoa by the representative of a foreign government.

These interpenetrating networks of hate overtly seem to target a regulatory body following due process in response to real concerns expressed by a traumatised community but the real aim is to attack the government. Even as we write, the Indian Weekender, which received funding of $750,000 over three years for four journalists under the Public Interest Journalism Fund but never carries the NZOA logo or mentions PIJF, is opining on free speech and censorship while implying the classification board is being influenced by unknowns. Typical conspiracy rhetoric.

In the climate of disinformation that is being seeded and circulated by right-wing groups in Aotearoa New Zealand, it is crucial for politicians to actively and critically speak out against it. On one hand, we are disappointed by the politicians of right-wing political parties such as ACT and New Zealand First. On the other hand, we are concerned by the silence of Indian-origin politicians of Labour, MPs Gaurav Sharma and Priyanca Radhakrishnan. 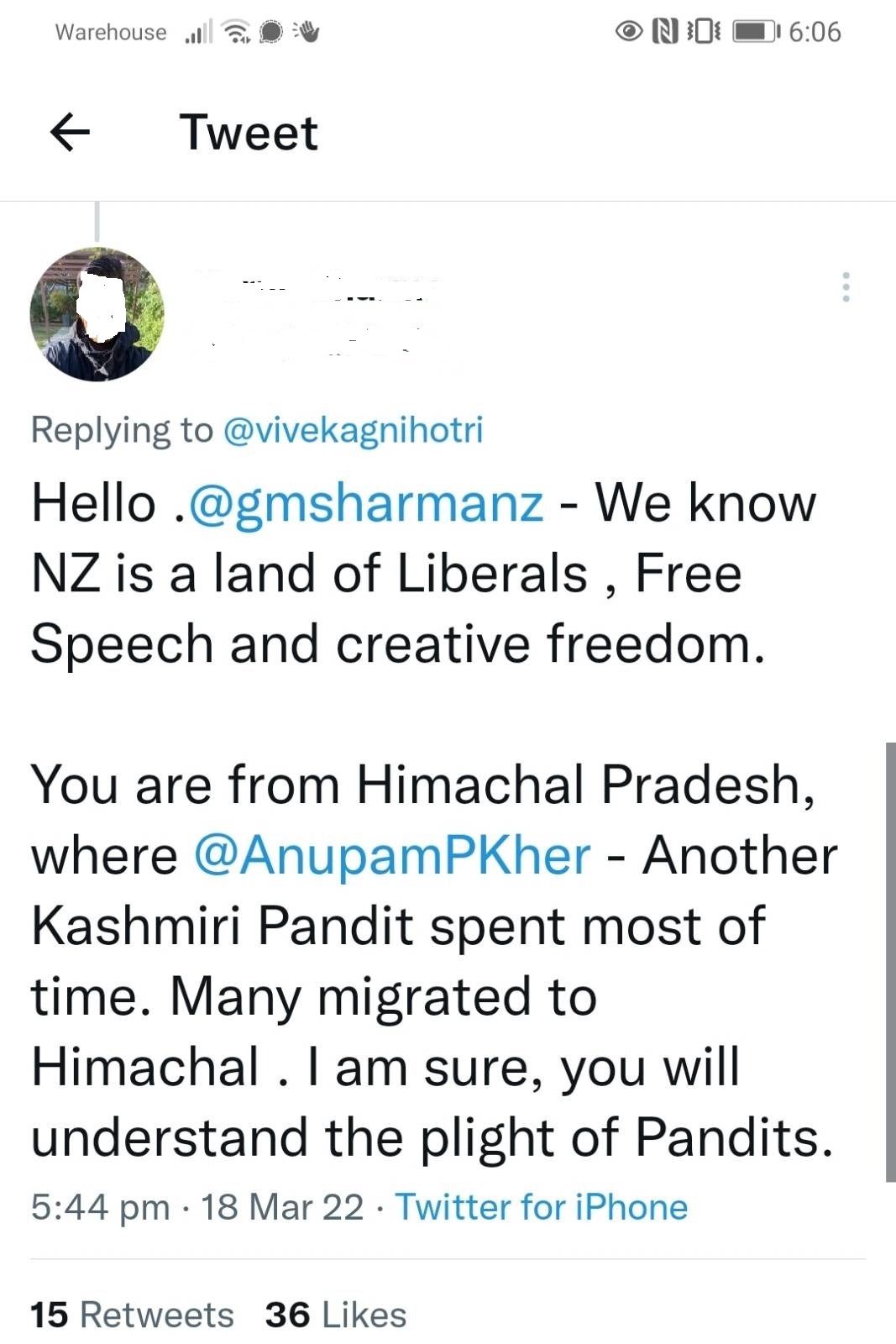 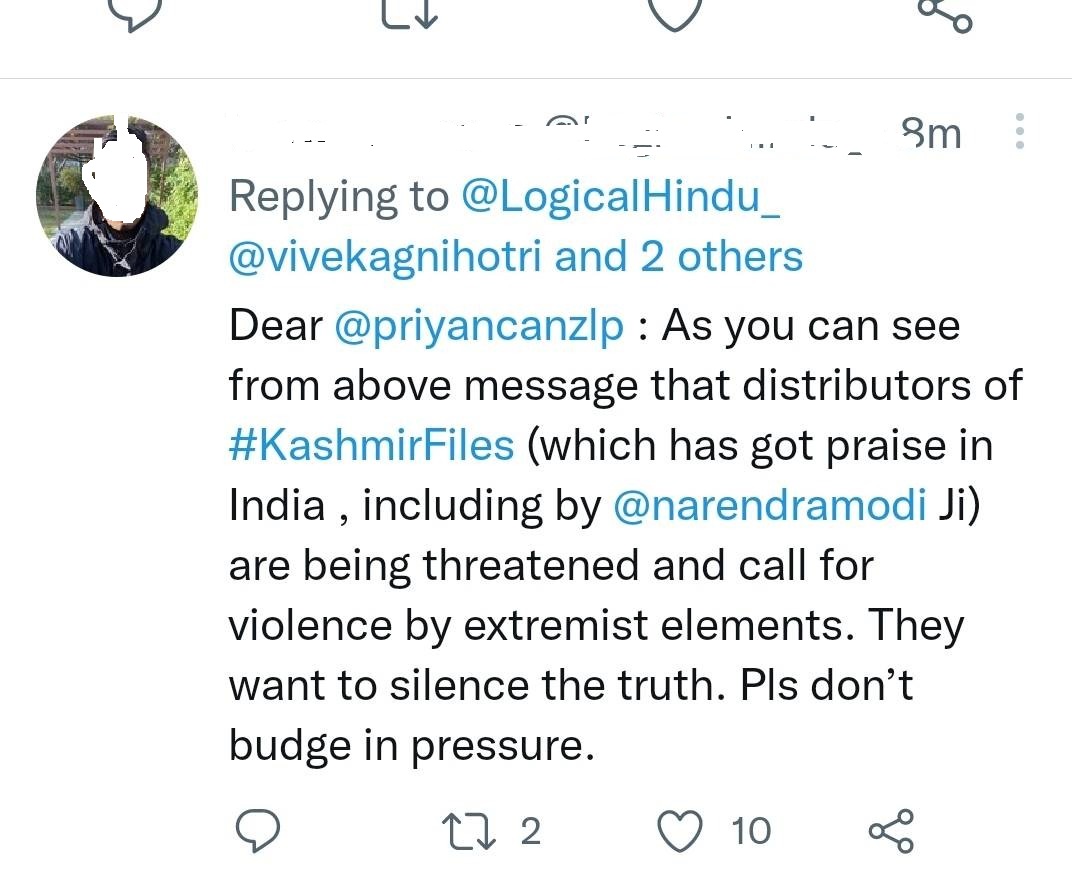 Unlike their Māori and tagata Moana colleagues who speak up about issues in their communities, the Indian MPs seem to be sitting on the fence about the disinformation tactics used by the Hindutva ecosystem to not only perpetuate hate, but also target the government and Prime Minister. We are concerned especially since the Ministry of Ethnic Communities touts their social cohesion project as a response to the Christchurch terror attack.

*We acknowledge the pain and trauma of Kashmiri Pandits and their stories deserve to be told such they are healing and restorative.